Meet  Rozzie, the Big White Dog in question.  She's a big, beautiful white German shepherd with coffee-colored eyes and a face that can only be described as "sweet."  She was born on February 8, 2006 and we brought her home on March 31, 2006, literally the minute she was legally allowed to come home.  She weighed five and a half pounds and her little round puppy head was slightly smaller than a baseball, with little triangular ears and a snubby little nose and needly little puppy teeth.  Her fur was like warm, fuzzy snow.

Now, she's a lot bigger!  She grew that signature German shepherd snout, and big ears that turn like satellite dishes to pick up whispers uttered two towns away.  Her teeth would make Sabretooth, the mascot of the Buffalo Sabres, proud.  Her front paws are almost as big as the palm of my hand.  She weighs about sixty or sixty-five pounds... we think.  We don't want to know for sure, because the only way she can get up and down the stairs in the house is if we pick her up and carry her.

Why?  Well, I'll tell you the long story a little later on.  But for now, to make that long story shorter, she had a staph infection very early on, which settled in her spine, and broke a couple of her lumbar vertebrae, and because the treatment options were limited for her because of her age, she had to be treated with an old-school cast that covered her from the base of her head to the base of her tail, and to keep blood flowing to the muscles and joints of her back legs, we had to do four hours a day of physical therapy, in hopes of preserving her ability to use her back legs.  Although her back legs aren't paralyzed, the knees stopped bending two months after her initial injury, so her legs are permanently and perfectly straight.  She gets around quite well, though, scooting around on her glutes on smooth surfaces, and outside, where she can get some traction, she gets up on all fours and takes off in her signature and unique peg-leg gait.  Her front legs are perfectly normal and unusually muscular, so she goes "run, run" with the front legs, with a "hop" with the back.  "Run, run, HOP, run, run, HOP!" Like a bunny.  So because those back legs don't bend, she can't climb stairs.  Not long flights, anyway. 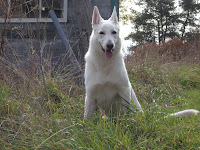 With Rozzie, the lesson is, where there's a will, there's a way.  She has a big bark, but once you let her know you're not up to trouble, she'll turn on the charm.  She can be quite adorable, and has even won over my mother, who always "hated" dogs, especially the big ones.  She's definitely more that "just a dog" for my husband and me.  She's our best friend, and such a character that she practically begs to have a blog written for her.
Posted by AprilBee at 7:53 PM 4 comments: